Eat your fill and leave the pills

Cooking commentary. If you were to do a count of the prescription pills you’ve taken over the last few years would you (a) be surprised that you’ve been so sickly or (b) justify your consumption by claiming you wouldn’t be here today if you hadn’t taken them?

If your answer was b, here’s another question for you: are you sure about that?

As far as the British Medical Association is concerned there are too many of us using over the counter medicines, a view that is echoed by the American Medical Association. The medical association’s concerns are not a recent issue, you’d have to go back as far as 1974 to find what is now known as the seminal report on the over use of medicines. However, apart from the continuous rise in consumption figures, what has brought the issue into sharp focus is the fact that the current economic down turn causes many of us prefer to pop a pill rather than be absent from work.

At this stage I should make one thing clear, which is that my interest in the pill popping issue isn’t about drugs that control the effects of major ailments; though opinions are polarized on whether there are alternatives to medicines for every ailment no matter how major. I’m far more interested in levels of pill taking for ailments real or imaginary that could be dealt with using alternative means.

For me, too many people view their bodies in the way they would a modern car: they expect it to work every time, they don’t think too much about the quality of fuel that goes in it and they are prepared to change any part that doesn’t please them. In truth, if we think about it, the only important similarity between a car and the human body is that they both run perfectly well when well maintained and handled properly.

Unfortunately for many of us having a well maintained body requires consistent and prolonged effort and that does not sit well with modern lifestyles. Yet the fact that concerns have been raised on both sides of the Atlantic shows just how important lifestyle change is. In the UK the Oxford Institute of Population Ageing has presented research which sums up the problem thus: “nearly 7m Brits are taking cholesterol-lowering statins and the use of drugs to prevent or treat pain is likely to become more common in the future.”

Professor Sarah Harper from the research spoke out about Britain’s dependency on pain-relieving pills at the Oxford London Lecture back in 2012 saying, “I think we may be entering a world where preventable chronic disease will not be prevented by public health measures tackling lifestyles, but increasingly by drug therapies which will control and reduce symptoms of chronic disease.” 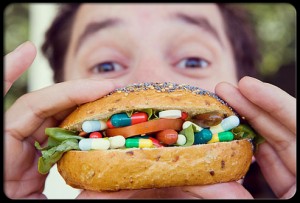 Harper’s prediction on where our attitudes to pill taking is heading also comes with a plea for caution: “We have to ask if we wish our future to be one where individuals at increasingly younger ages pop pills rather than eat healthily, stop smoking, reduce alcohol and take up exercise.”

In America the concern, according to the Journal of the American Medical Association, is not just around the level of pill taking but the fact that the trend affects both young and old. They have summed up the issue saying, “A debate continues to wage as to whether or not American doctors over-prescribe. At one spectrum of this argument, critics point to drug epidemics in various age groups as signs of a pill-popping culture. For instance, more than 40 percent of Americans age 65 and older take five medications per day, according to a 2008 study published in the. And, each year, more than one-third will suffer an adverse side effect as a result.”

It is interesting that Professor Harper mentions that one of the things that could be done instead of popping pills is to eat healthily, this is something you wouldn’t expect me to ignore given all that has been said in this column over the last few months. But before I go into my cooking recommendations I just want to take a further look at the notion that it is possible to eat yourself healthy. The Guardian newspaper offered this piece of advice “No matter how old you are, eating a healthy diet is as essential for your well being as exercising. But there are times in life when your body may need a little extra help. Topping up on certain nutrients can make a real difference to how you feel.”

While the Guardian’s advice suggests that a healthy diet can do wonders for your health, something that I’ve often preached, it is worthwhile noting that this cannot be true in every case. Laura Tennet writing about the rise of pill culture in the Telegraph newspaper unashamedly acknowledges that she’s a beneficiary of pill culture and admits to taking Prozac for her melancholy nature, the contraceptive pill for obvious reasons, Anti-histamine for hay fever and Paracetamol to deal with hangovers. antibiotics. While I might take issue with the reasons for taking some of the medicines on that list I can readily accept that food alone will not fix the type of chemical imbalance that triggers bouts of deep depression.

What I want to look at however is the types of foods that you can take that will, given that you’re not suffering from a life changing illness, give you a feeling of well-being and help you fight off minor illnesses. Before I lay out my recommended recipes here’s a list of foods that are said to make you feel happy and as such should be a part of your daily diet: walnuts, tomatoes, mangoes and cayenne Pepper. As for the cooking I’ll focus on collard greens, quinoa, salmon, clams and avocado.

We're not around right now. But you can send us an email and we'll get back to you, asap.